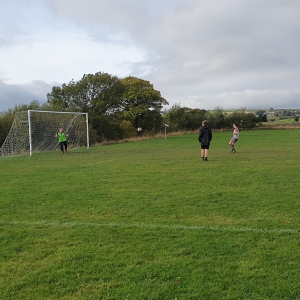 The game started even with both teams passing the ball around well and having chances. The game was very closely matched but it was Penistone who broke the deadlock with a long ball over the top which their striker managed to get to first and put the ball high over Ella in goal.

Charnock didn’t let their heads go down and went straight on the attack with some good passing which put Shola through on goal but she just lifted it over the bar. Both teams kept battling but it was Penistone who got the next goal, doubling their lead with a good shot which was saved however the rebound was nicely slotted home.

With nothing to lose, Charnock went on the attack again and received a penalty when Shola was brought down in the box. Iris stepped up to take it but it was struck a little too well and the ball sailed just over the bar. Charnock kept on with the attack and 5 mins later, Evie went on an excellent run into the box, shooting down low but somehow the ball was stopped on the line. The half finished 2-0.

The 2nd half started in the same fashion with both teams having chances but it was Penistone that took their chances making it 3-0.

Again, Charnock had chances and Penistone’s keeper made an excellent save to deny Keris from close range. It seemed to be one of those games and an own goal made it 4-0 which was how it ended. Thanks to the opposition player who offered kind words of wisdom to our player following the own goal.

It was an excellent performance overall and the score seemed harsh on the effort the girls put in this week. Well done to Leela and Iris in defence who both worked hard this week. All the girls are improving week after week and their first win is coming.

Dearne and District U10 Girls v Charnock Girls U10 - Under 10

Rotherham United Whitehill Girls U11 v Charnock Girls U11 - Under 11