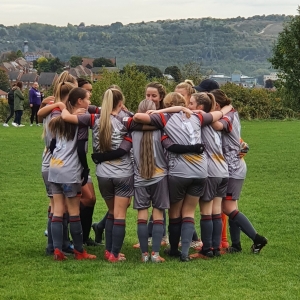 This morning we travelled to Crosspool - our fixtures seem to get harder each week. This was always going to be a massive test for our girls as last time we played them we lost in the semi-final 0 v 7.

So even before kicking a ball this morning our mental attitude had to be spot on, and it was, the girls were absolutely tremendous.

Charnock started off really brightly taking the game to Crosspool, having a half chance after the first minute but their Keeper read the danger. For the first 10 minutes we were the better side but then Crosspool came into the game, having a few half chances, but our defence looked very solid and kept them at bay.

This game was becoming a midfield battle, most of the ball was in that area, Crosspool are very strong in midfield but we were matching them stride for stride.

Midway through the first half another chance came when Freya hit a long-range shot from 25 yards just missing the far post. Then Leah did brilliantly on the left wing, going past one player, crossed the ball, but just couldn't find anybody at the far post.

At the other end Crosspool went close a couple of times, but the score at halftime was 0 v 0.

We warned the girls at halftime to stay focused because Crosspool are a very fit team and usually score lots of goals in the second half.

It was Crosspool doing the early pressing in the second half, playing quite a few long balls over our defence but Ellie C our Keeper read the danger, coming off her line.

We were struggling a bit to get out of our own half and weren’t creating as many chances as the first half. But midway through the second half our first chance came when a good ball from midfield sent Lily P through, but the Crosspool Keeper saved the chance.

This game was getting really physical with challenges flying in but our girls stayed focused and strong. Midway through the second half the breakthrough came for Crosspool when a neat cross found their striker who finished it neatly in the box making it 1 v 0.

Then in the last five minutes our equaliser came - Megan got brought down at the side of the penalty area. Freya O stood over the ball, Crosspool lined up their wall, this was around 20 yards but it was a very difficult angle right at the side of the penalty box with loads of bodies in the area.  Freya O, with a bit of individual magic struck the free-kick, flying straight into the top corner - everybody went crazy - it was early contender for goal of the season!

Overall we were absolutely delighted for the girls for getting a well-deserved point.  We had discussed before the game that our attitude had to be spot when you lose heavily like last time, it's not easy playing them again, but we are so proud of the girls. They stood up to Crosspool who are a very physical, strong and good team. Crosspool are very strong in midfield, winning lots of first balls and second balls, but our midfield today matched them. We went for the same system as Crosspool and said if you win your individual battles you've got the chance and that's what happened.

Ellie C was fantastic in goal - faultless display. Our back three were solid, strong and very disciplined and limited Crosspool to a few chances. Our midfield worked tirelessly putting an unbelievable shift in, winning individual battles in there. And our strikers worked hard, didn't have as many chances today but still put a fantastic shift in and always looked a threat.

The Crosspool manager praised our girls for a terrific performance which is much appreciated and nice of him.

Really pleased for the Girls, they have had five really tough games and are still unbeaten - I can't praise them enough.

Looking forward now to Rotherham away next week.

Dearne and District U10 Girls v Charnock Girls U10 - Under 10

Rotherham United Whitehill Girls U11 v Charnock Girls U11 - Under 11