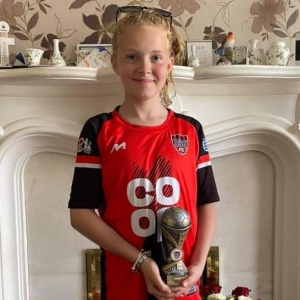 Playing at home, we welcomed Crosspool for the quarter final game of the post-season shield.

It was a beautiful, hot, sunny morning in Sheffield. Unfortunately, due to it being half-term week, Crosspool were very low on numbers and as a result, we agreed to play 5 a-side. Charnock had almost a full compliment, with 4 players on the bench, whilst Crosspool didn't have anyone to bring on!

We started the game with Grace in goal, Lacey and Emily in defence, and an attacking midfield of Jess, and Poppy. Playing with smaller numbers, on a larger pitch initially proved difficult for the girls to get used to the extra space. Due to the heat, Coach May made rolling subs throughout the match to try and keep the girls as rested and hydrated as possible, with Evie C, Erin, Merci & Honey all getting a good amount of game time.

The teams were very evenly matched, with both committing players forward, and leaving plenty of space in behind for the opposition to run into.

The game played out like a basketball match, end to end and the first goal went to Crosspool, followed quickly by an equaliser, and then a 2nd goal by Merci to put Charnock 2-1 up. Crosspool equalised, and then Poppy scored for Charnock with a great run from the halfway line and strike into the bottom corner, and yet again, Crosspool equalised to go in 3-3 at half time.

Second half started much like the first finished, a goal each and it was 4-4, with Merci getting her third of the game. Crosspool scored two quick goals without reply to go 4-6 up. With only 10 minutes of the game to go, and all players looking tired, it needed a huge effort from Charnock to win the game from here. But, inevitably, the heat, and lack of subs for Crosspool was starting to show.

Evie C came on and made some great runs at the Crosspool defence, they couldn't handle her pace, and the introduction of Honey added a bit solidity to the defence. As Crosspool began to lose a grip on the game, the interplay between Poppy, Merci and Honey was causing them all sorts of problems. This inevitably led to a goal, a great passing play between the 3 of them, and a close range finish from Merci made it 5-6. Shortly after, Merci and Poppy again combined well, with Merci running down the wing and playing a great cross to Poppy just inside the box to finish off with a low strike to equalise again, 6-6. It was only for their Goalkeeper that Crosspool were still in the game, making two great saves from Poppy’s long-range shots, and Honey and Lacey both having efforts saved from inside the box.

With only about 90 seconds to go, one last push from Charnock created the opportunity for Merci to get the winner and her 5th of the match. Some game management from a corner and the final whistle blew.

What a fantastic match to watch. Credit to all the girls managing to keep running in the heat, and especially the x5 Crosspool players who all played the full 60 mins!! Final score, 7-6 to Charnock and through to the Semi finals.

Girl of the game Evie C.