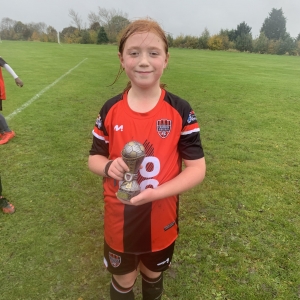 Away at Wickersley this week for our third and final shield group game, the pressure was on with the girls needing a win to progress to the quarter finals. We started out with Grace in goal, Evie M and Lacey in defence, midfield was Jessica, Poppy and Evie C with Honey up front.

The girls started well and you wouldn’t have known they were the team kicking up hill after they created a number of early chances with both Honey and Poppy going close. Jess made a number of strong surging runs and we took the lead when Poppy scored from range with a rasping shot.

Kav made a few changes and the girls started to really take control of the game with Evie C causing problems for the Wickersley defence and going close on several occasions, supported by strong running and crossing by Merci and Niamh on the wings.

Soon after Poppy scored a deserved second, but this only seemed to galvanise our hosts who started creeping back into the game. They found our defence strong and were thwarted by strong tackles from Evie M and Lacey. On the rare occasions they did break through Grace was there to clear up and start some meaningful attacks with some great kicking. Half time – Wickersley 0 v Charnock 2.

Kicking downhill in the second half we again started strongly but conceded against the run of play with the hosts scoring a bit of a wonder goal giving our defence no chance. Not put off by the setback the girls continued to power forwards with strong running from Emily in the middle and their hard work was rewarded when Merci scored to put us 3-1 up.

Kav continued to freshen up the side and there were some great dribbling mazy runs from Honey. The pressure finally paid off with 2 goals in quick succession, firstly Poppy sealing her hattrick from distance and Merci bundling home a corner. Again, this seemed to give our hosts fresh motivation and they had the ball in the net from a corner but the referee had already blown the whistle so it didn’t count.

Girl of the game today – Poppy