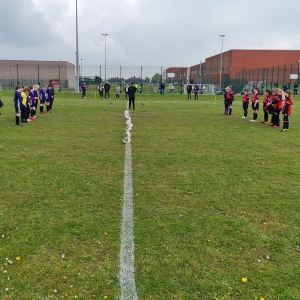 A dry start, which after last weeks weather was a good thing. We also had the later kick off with Kav taking the early slot.

We were 2 girls down, with Amber and Grace both ill this week (get well soon) and we were up against a team, that similar to us, had only been together as a team this season. Our aim today was to close down and and be more confident with the ball.

We started well and it was an even game from the off. Our girls were again showing they were continuing to take what we had worked on in training into the game but Sheffield United broke the deadlock halfway through the 1st half with a good strike low into the bottom corner.

About 10 mins before half time, Nieva had to come off injured after getting caught on her foot. This meant a change around at the back which unsettled us and we went in 3-0 down at half time.

We started the 2nd half switching Sophia and Kate around in goal but Sheffield United scored a 4th goal early on with another great strike into the top corner from the edge of the box. We continued to close down and battle and managed a few adventures into their half, gaining a couple of corners that were took really well by Lola. Charlotte, Tamzin, Sophia and Amber made some great runs today and we were solid at the back from Maisie and Lottie.

It was really pleasing to watch the girls today. The game at times was close and we competed really well. Towards the end  there was a few lacks in concentration and the game finished 7-0. The signs are there, and so we go again at training on Tuesday. We need to work hard and go into the last group game next week against Scawthorpe confident in our ability.

Kick off and meet time will be given as soon as I know.