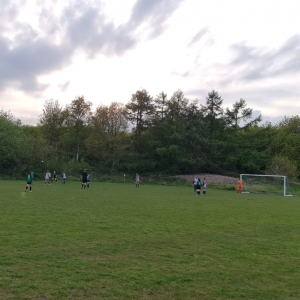 This was our 3rd attempt to play this game. It was originally postponed last week due to a water logged pitch, and then was called off minutes into the 2nd half on Tuesday due to the heavy rain and thunderstorms and so it is credit to everyone involved that we were able to get together again for the 3rd time in the space of a week.

We only had 9 players but their attitude and effort was 100%.

It was a close game with very little between the teams and although we went 2-0 down, we got our well deserved goal.

Our goal came from a great corner swung in from Grace. It landed right under the crossbar and although the last touch came from one of their players, the delivery deserved the goal. We were not able to reduce their lead any further and the game finished 2-1.

We see players improving after every game and so keep doing what you are doing. From Chloe in goal, growing in confidence with every match we play, to the leadership on the pitch from Isabel. Edie is calm and collective and also works hard to be in the right place at right time and Amelia has speed and power to win the ball to support. Bleu and Chloe playing in the centre have the endless task of running and making tackles but never stop and are full of energy. Mollie works hard tracking back and is showing how she is growing and improving with every game. Grace continues to deliver great passes and works hard on and off the ball. Finally, Izzy had a great game playing in a new role as striker. She took it all in her stride, was strong against the opposition and made it difficult at times.

The 'Player of Match' could have been any of the girls for the 100% effort they all put in, so it was a difficult choice this week. Due to the progression Edie has made since returning to football after lockdown she was a well deserved winner this week. She is a very capable player who is calm on the ball, has a fantastic first touch has grown in confidence each week. We are looking forward to watching her progress even more next season.....well deserved.

Overall, we were very proud of all the girls tonight and you all played your part in a good game of football.