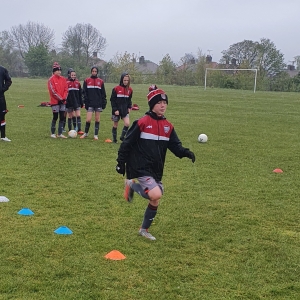 For our first match in the Shield cup, we welcomed Kiveton.

In awful conditions, it wasn't ideal for a game of football but credit to both teams for playing and providing us with a decent game of football today. Also a special mention to Kiveton as they were short on numbers today but did themselves, and their coaches proud for their attitude and performance.

The game started and Charnock took the lead after a few minutes following a great ball from Hollie through to Lily P. It was a lovely finish in the top corner, making it 1-0. The half progressed and we found ourselves with great opportunities but the final ball was just missing today. This seemed to be the same during this half and we made it really hard for ourselves, very often making the wrong decisions around the oppositions penalty area. We kept going and following a foul on Megan, we were awarded a penalty. Megan stepped up and the Kiveton keeper made a good save. Altough our decision making was not always the best, we still had a number of missed opportunities, hitting both the post and crossbar. Lilly S came close this half following another great run, beating their full back again but was denied by a great save from Kiveton keeper.

In the second half we started to make our passes count and were finding Charnock players a lot better. As we were moving the ball better, it wasn't long before Lily P got her second goal. She was in the right place at the right time, making it 2-0. Kiveton struggled to get in our half after the break and we continued with the pressure going forward. The Kiveton goalkeeper had a great game, helping to keep the score low after making some really brilliant saves.

Our pressure continued and it wasn't long before Lily P got her hat-trick with some neat passes around the edge of the box.  As the game continued, Lily P scored 2 more, taking her total for the morning to 5. Megan and Leah both came close to scoring and were unlucky not to get on the scoresheet as well but were once again denied by some fine saves. Final score 5-0.

Although we are happy with the win, personally I was disappointed with our first half performance. I felt that our decision making was poor at times and there wasn't enough movement off the ball. I also wanted to see more girls taking responsibility on the pitch. Some of these thing we will work on at training and second half we were much better as we started to find our passes with more movement. With stronger finishing, the score could have been a lot more due to the amount of attacks we had.

Special mentions today for Lilly S as you put in an outstanding performance. So confident in your ability, you beat your opposition full back several times and were unlucky not to score. Also mention for Lily P, clinical finishing by scoring 5 goals which is a great achievement on any level.