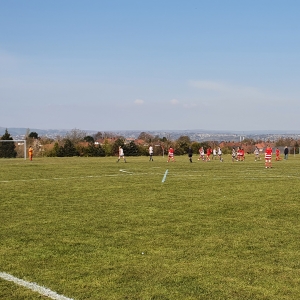 Our second cup game at home and this time we welcomed Club Doncaster U15 Girls, another team in the higher division, who were going to test us today.

This morning we were a bit short on numbers so asked a few of the girls to play out of position. Doncaster started off the better side doing the early pressing but without really testing Ellie in goal. Doncaster did a high pressing game and it was limiting us to create decent chances. As the game went on we started to get a few opportunities - first one fell to Megan who hit her shot just wide from the edge of the box. A ball over the top sent Lily racing through, just denied by the Keeper. And a great move off the right wing where are lovely cross from Lily just couldn't find any Charnock girls in the box. Then the breakthrough in the game came with a cross from the left wing finding a Doncaster girl in the middle of the box with a neat finish. It was a bit unfortunate conceding a goal 1-minute before H/T.

Second half began and we were looking more positive going forward. Putting Doncaster on the back foot and limiting Doncaster to half chances. As the game went on, we made a change to formation with three up front. And it looked only a matter of time before the equalizer would come. Unfortunately it didn't but the chances kept coming and coming. We had a great chance from Leah’s corner which found two of our girls at the back post but unfortunately couldn't manage to squeeze it in. Next one came from a scramble in the box, it looks like Megan scored but was denied right on the goal line from the Doncaster defender. We kept plugging away then the best move of the match came. Leah took a short corner to Morgan who played it back to Leah, put a lovely ball in and Eva hit it on the volley, just sailing over the crossbar. We carried on attacking throwing everything at Doncaster but it wasn't to be, with the final score 0 v 1.

This match was a great advert for girls football, two teams went for it from the beginning and it ended up being a brilliant Cup tie. We couldn't fault our girls for their efforts and desire. If the girls carry on playing like this the results surely will come.

Good luck to Doncaster for the next round of the cup.

All 13 of you were outstanding today and all contributed to this game. A special mention today though for two players playing out of position. They have never played these positions before but were brilliant. Morgan at Centre Half and Leah playing Central Midfield.  And also to Corah - this girl puts a good consistent level of performances in every week and just gets better and better.

Rotherham Whitehill U15 v Charnock Girls U15 - Under 15