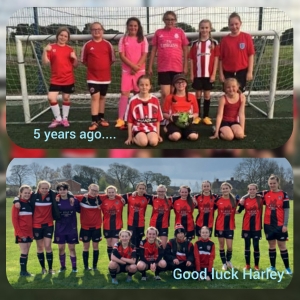 We finally got back to football after around 3 months off with lockdown, starting with the first of our cup competition games today. This morning we welcomed Millmoor Reds who are one of the strongest teams at under-15 level and so this was always going to be a challenge.

We started off really well, Millmoor doing all the early pressing but we stood firm for the first 20 minutes and their first goal came from a OG which was a bit unfortunate. Their second goal come shortly after and I felt a bit sorry for the girls at this stage as they didn't really deserve to be losing 0 v 2. Millmoor then showed their ability and came alive scoring 3 cracking goals with nothing we could do about them.  Our girls were finding it tough with Millmoor playing some lovely football and the H/T score came in at 0 v 5.

The second half started a bit like the first half with us defending really well again. Millmoor got their first goal of the second half from another OG, again a bit unfortunate how it went in at the near post. The girls kept going and we had a decent free kick which got blocked and on the rebound their Keeper saved it. We didn't threaten too much at Millmoor’s goal but their Keeper made one fine save with her legs. Half way through the second half Millmoor scored again making it 0v7.

Our Girls were starting to tire a bit but Millmoor’s movement and passing off the ball were excellent and in the last few minutes managed to score 3 more, and their quality really showed. The final score ended up 0 v 10.

One thing I will take from this game is that our players heads never dropped, they kept battling and going right to the final whistle. All the girls put a brilliant shift in. It was hard today to single any player out because they all did their part but a special mention to Hollie who is improving in every game with her tackling and desire to win the ball, I thought she won all her individual battles today.

One final point to mention from me and our coaching staff. We want to thank Harley who played her last game today. Harley has been at Charnock from day one and has been a credit to this club. Harley always gives 100% and her football ability has come on immensely - she will be really missed. I think we all had a lump in our throats when Harley came off for the last 5 minutes to a round of applause from all the girls and parents from both teams - good luck in your new job.

Rotherham Whitehill U15 v Charnock Girls U15 - Under 15